Although the most recent MyBlogGuest.com penalty is the main topic that inspired me to finally speak my mind, this post isn't just about guest blogging and how Google and Friends Google Inc. unfairly penalized MyBlogGuest. There are other issues I am going to address as well (that will be in Part 2 of this post), but let’s start by discussing the MyBlogGuest debacle, shall we?

This is a guest post by Gerald Weber – the views expressed in this post may or may not be those of Ana Hoffman.

Matt Cutts and “Stick a Fork in It [Guest Blogging]”

I actually agreed with Matt’s overall sentiment in his “stick a fork in it” post regarding low quality guest blogging.

How Guest Blogging Can Send Your Brand and Reputation Straight to Hell (dammit, forgot to use generic anchor text here!)

Not only did I talk about the possibility of Google one day taking action against low quality guest posts, but more importantly I discussed how guest blogging for the wrong reasons could come back to bite people in the ass and damage their brand and reputation.

Since I am a very strong advocate of guest blogging the right way, I partly agree with the idea of Google taking action against low quality guest posts.

BUT, I also believe Google has gotten way too penalty-happy. So I think a better description of my belief is that I agree with the idea of Google not counting low quality guest posts or discrediting them in some way.

Unfortunately, instead of taking that kind of balanced approach, they are attacking the practice itself and anyone who is part of a community that guest posts.

Instead, everyone is guilty by association. NO fair trial. In fact, no trial at all. Just a guilty verdict, and then the hammer comes down; BAM! 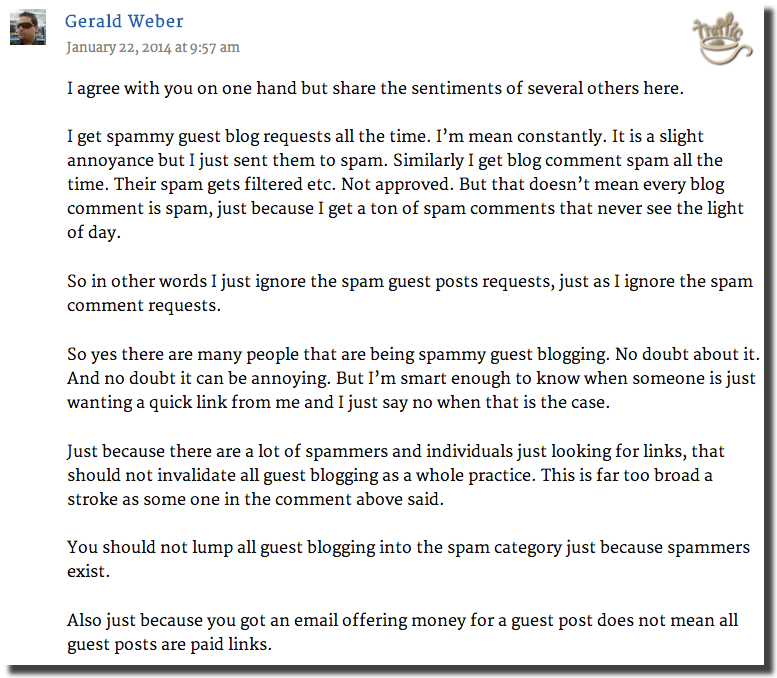 Shortly after, he revised the post title to imply that you should not guest post solely for SEO benefits.

I agree that you shouldn’t guest post just to try to manipulate Google. Fair enough. We can still guest post without fear so long as we aren’t being spammy about it and aren’t doing it just for SEO reasons.

BUT then Google penalized MyBlogGuest and the ENTIRE COMMUNITY just because the site is promoting guest blogging.

This is contradictory to the message in the “put a fork in it” post that implies guest blogging for SEO purposes is the problem.

It’s very clear that this was a PR stunt by Google to scare everyone away from the practice of guest blogging.

But if not all guest blogging is bad, and it’s OK to guest blog as long as it’s not for SEO, then it must all boil down to intent.

Then that means Google needs to judge every guest post on an individual basis.

You cannot, in all fairness, blindly cast judgment on everyone who was part of that community in one fell swoop and say that they are all guilty of guest blogging for SEO.

Also, let’s be clear about a couple of things:

It never makes sense to require a nofollow link on a guest post because they ARE editorial.

It just doesn’t make sense to require a nofollow on guest posts BECAUSE THEY ARE EDITORIAL LINKS!

Obviously, if the intent is for SEO purposes, technically according to Google law, they should be nofollowed. OK, I can follow that rule. And IF you find someone abusing guest blogging for SEO purposes, then punish that person instead of everyone who guest posts.

Some speculate that Google took action because Ann Smarty, MyBlogGuest founder, stated that she would not allow nofollow links in guest posts within MyBlogGuest.

Ann Smarty has since then changed this policy not to bend to Google’s will, but because she did it for users who were scared and wanted that option.

That being said, not allowing nofollow links is still not a violation of Google’s quality guidelines because:

Here is what concerns me the most about Google penalizing MyBlogGuest and all of its users:

The bottom line is Google’s still OK with penalizing innocent websites to accomplish their end goal.

Google knows that most of the users haven’t done anything wrong. They are getting slapped just because they are guest blogging and a member of a popular guest blogging community.

MyBlogGuest is the biggest and most well-known guest blogging related site on the Internet. While there are plenty of spammy services out there that deserve to get the Big G slap, Google instead picks on the best known site so they can send their PR scare tactic message to the entire SEO world.

And Google definitely accomplished that:

Great job, Google Inc! Your PR message that Google will get you for guest blogging was spread far and wide!

But that still doesn’t change the fact that MyBlogGuest and its users did nothing wrong.

And here is what troubles me the most. Even though Google knows MyBlogGuest and its users did nothing wrong, they are OK with innocent sites getting penalized so long as they accomplish their goal of FUD.

Doc Sheldon said it best in his post about Google’s PR stunt attack on MyBlogGuest:

I have a theory… one that I think is well-founded. I think MBG is simply a large enough target to make a good “example” of. I think that by hitting not only that network-that-isn’t-really-a-network, but also people that had ever linked to them, had a profile on that site or published a post they had acquired there, enough FUD would be generated to effectively destroy not only MBG, but their business model.

As a corollary to that theory, I think that Google knows that in doing so, they’re hurting a lot of innocent sites, and has made a conscious decision that those are “acceptable losses”. It’s easy to consider them acceptable, provided the losses aren’t yours, aren’t they, guys? Is a scorched-earth approach really the one you want to employ?

It’s very disturbing to know that as long as they are able to accomplish their goals, Google is OK with innocent casualties. Very disturbing indeed!

This is wrong and unethical on so many levels. Dare I say, in fact, a bit evil? Knowingly penalizing innocent websites to accomplish your objective is WRONG and unethical, period.

The general consensus in the SEO world (and I mean people that really eat, sleep and breath our craft) is that the MyBlogGuest penalty is complete bullshit.

To illustrate this point, check out the Video from my friends at the SEO Training Dojo:

They also make another interesting note that Google is OK with accepting ads from those offering guest blogging services:

A bit contradictory to your overall message, eh?

Now that we’ve discussed MyBlogGuest issue, let me back up and tell you a few things about my dear friend Ann Smarty.

Ann is a shining example of how to guest blog the right way by adding immense value and usefulness to readers. She is a prolific writer and constantly creates some of the most outstanding and useful content I’ve ever seen on the web.

Ann can regularly be found publishing on some of the web’s top blogs, including Mashable, SEOMoz, Internet Marketing Ninjas, MakeUseOf, Social Media Examiner and MarketingProfs.

Additionally, she has written several times about why you shouldn’t guest blog solely for building links. You can see examples of that here and here.

Ann is the perfect role model for marketers interested in guest blogging.

She is truly is one of the good guys. She’s not the one you should be hating. She has made every effort to do everything right.

Yet she is the one Google decides to make an example of?

Gerald Weber is an internet entrepreneur from Houston Texas, founder of Search Engine Marketing Group, team member at MyBlogGuest (the free community of guest bloggers), and long time friend of Ann Smarty, the founder of MyBlogGuest.com. 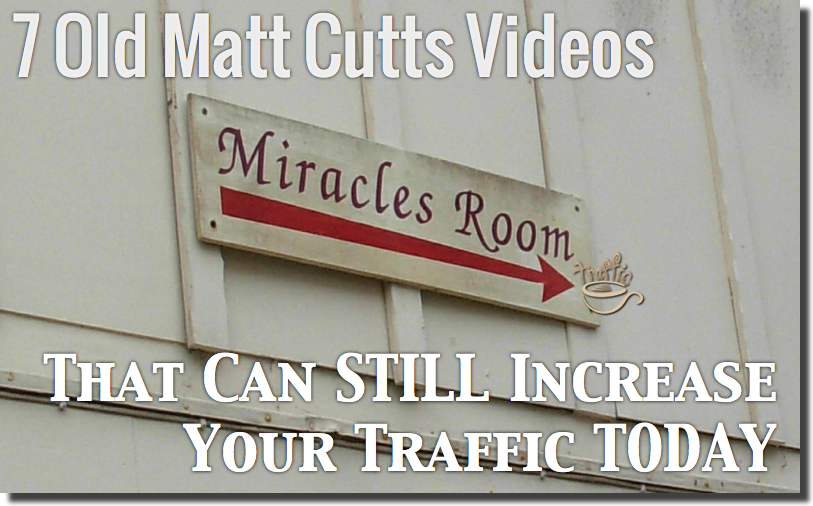 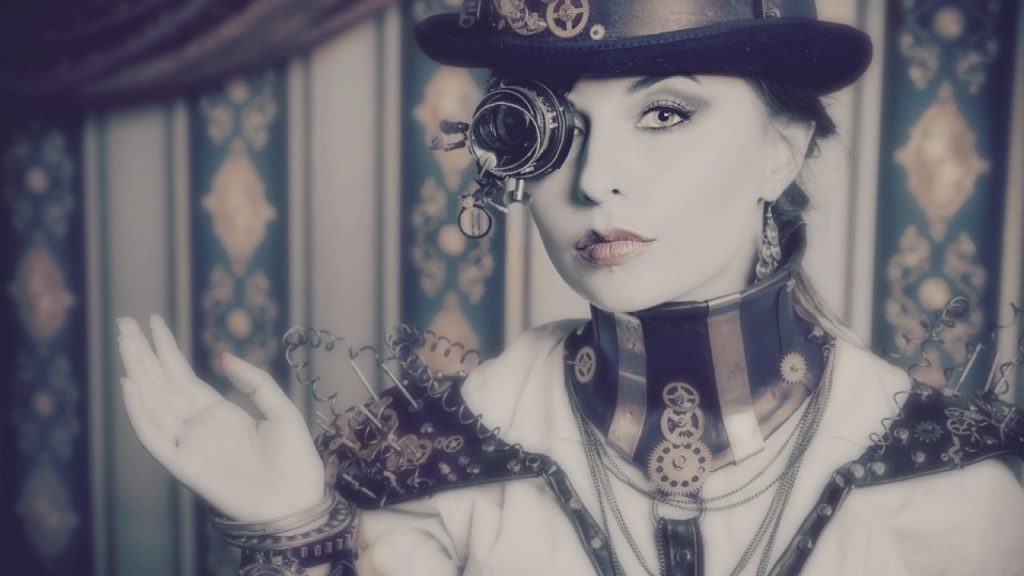 18 Intelligent comments · espresso yours below

This site uses Akismet to reduce spam. Learn how your comment data is processed.