I know exactly how you feel. I had not one, but several Twitter accounts suspended at one point or another.

Full disclosure: some of my Twitter account suspensions didn’t exactly come as a surprise… I knew I was playing with fire! 🤪😅

Whether you knew you were breaking Twitter rules that got your Twitter account suspended or not (that’s between you and you! 😉 ), let’s take a look at

However, since humans now have a SHORTER attention span than your childhood friend, the goldfish (I know, right?!!! We ought to be ashamed of ourselves! 😬😊), something I’d normally save for the end of the post has to be said now – while I have your FULL ATTENTION. 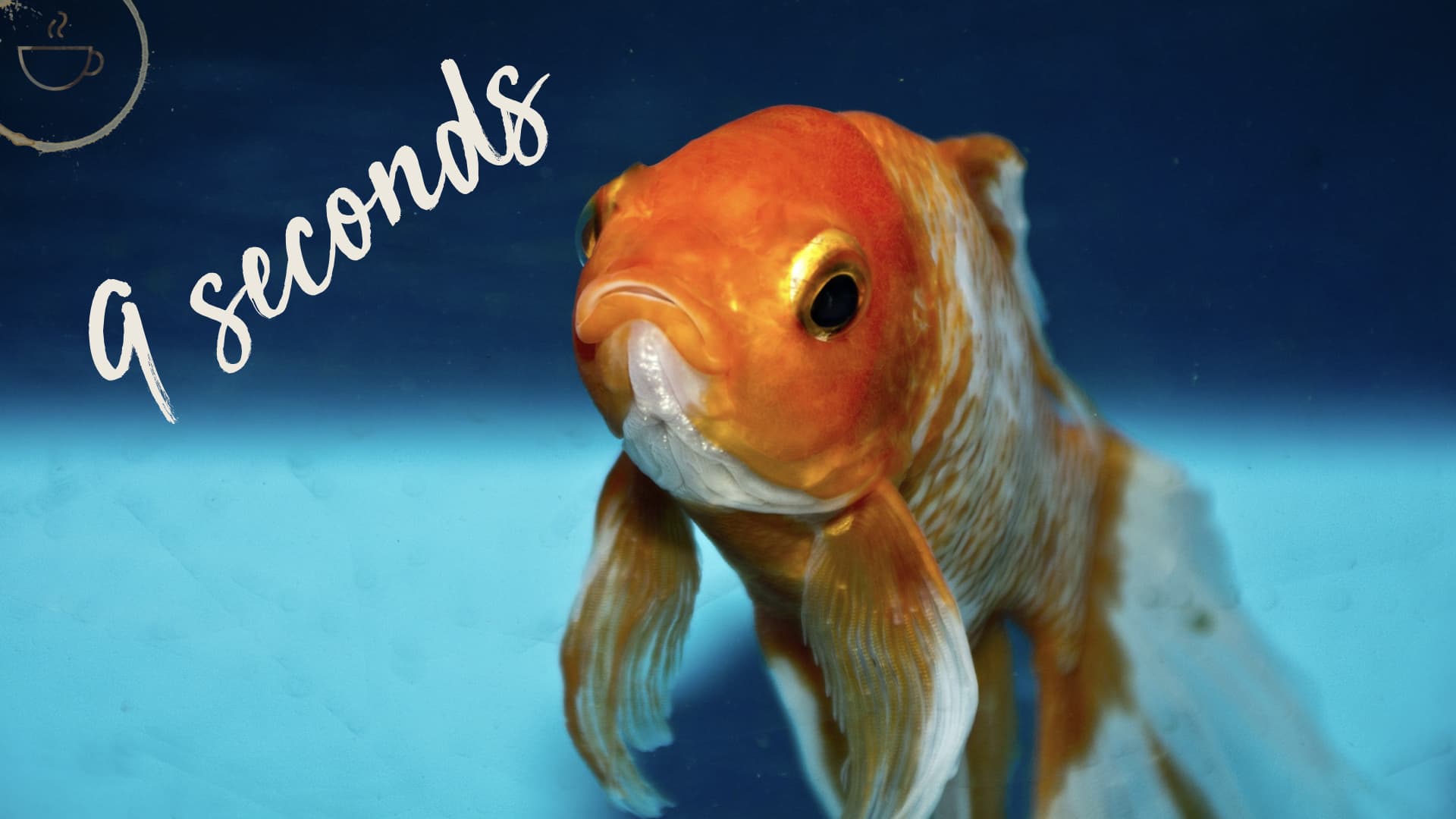 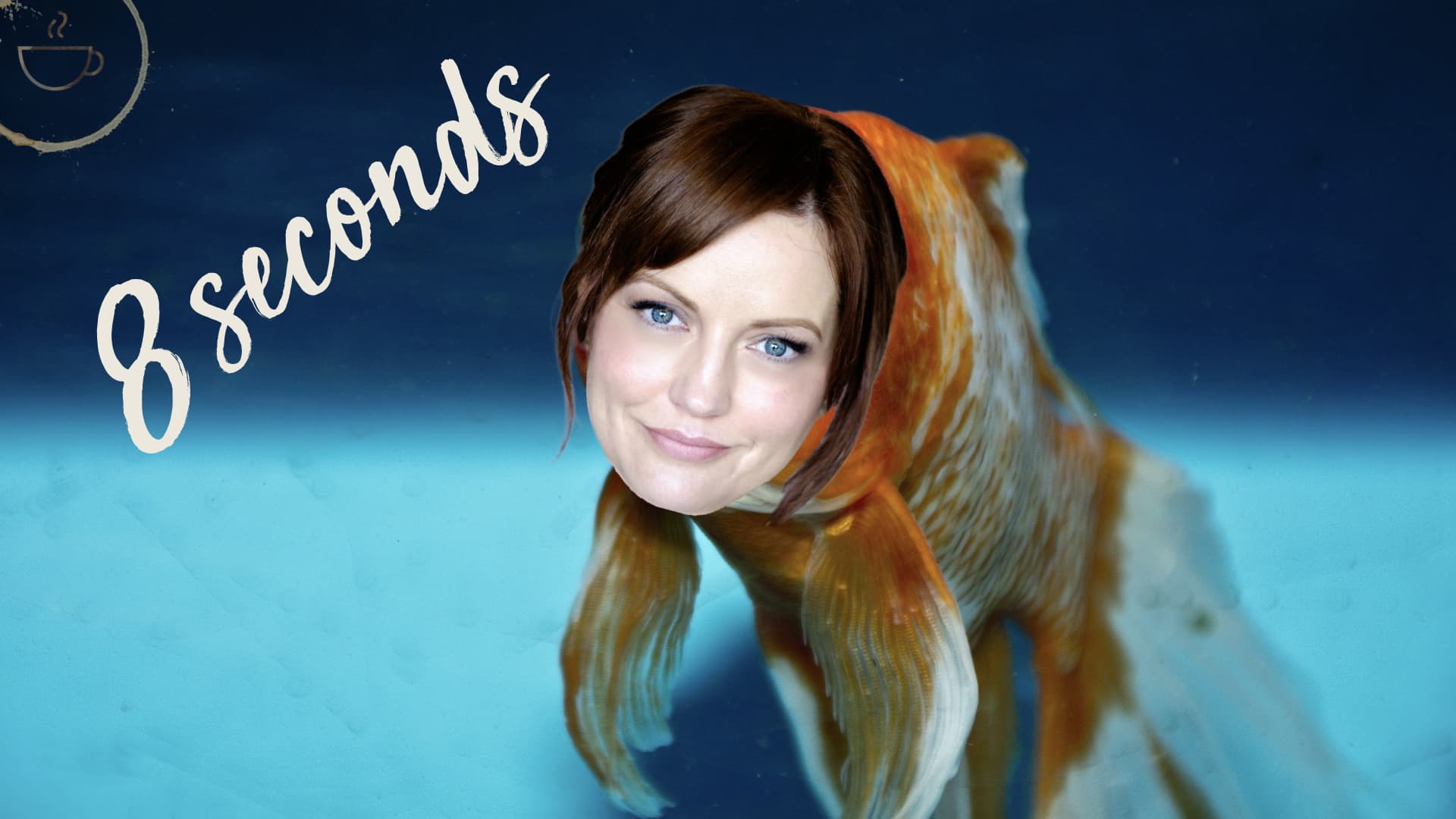 Still with me? Or are you completely distracted by my masterful content repurposing?… (in this case, summing up the very long Microsoft study in two images.)

Wait, where were we? I’m so distracted… 😁😉 Oh, yes, something really important…

When using third-party platforms (any website you don’t own, in other words), you are completely at their mercy.

You are not ‘entitled’ to anything.

Their platform. Their rules. Their last word.

If they were to close their doors tomorrow (like Google+ just did), everything you’ve built on that platform is done for.

Thank goodness, a platform closing down for good is extremely rare.

Speaking of Google algorithm changes, did you know Google changes it around 500–600 times per year? 🤯🧐

No one can protect you from platform changes. All you can do is suck it up and adapt.

So, if your Twitter account is suspended, you’ll find yourself at the mercy of a random Twitter employee to plead your case to. And, let me tell you, they haven’t been that merciful, as of late…

Now… when I said, “All you can do is suck it up and adapt“, I was only half-serious.

There IS something you can and SHOULD do to protect yourself.

When using ANY third-party platform (Twitter, Facebook, SlideShare, Medium, whatever), your goal is to bring people you engage with back to your site as quickly (but spam-free-ly!!!) as possible, then build those relationships on your own turf and terms.

That’s precisely why I wasn’t crying when my Twitter accounts got suspended. At least, I milked them for all the website traffic I could before I was busted. 😉

(Details in the best Twitter tools post mentioned above; take a look at it when you are done here.)

The following behaviors are violations of the Twitter Rules:

As such, these accounts will remain suspended.

You used to read it everywhere, “Post your tweets multiple times to make sure your followers actually see your content!”

Oh, yes, the good ol’ golden standard of making yourself visible on Twitter…

No longer the case.

You may not post duplicative or substantially similar Tweets on one account or over multiple accounts you operate.

So, whether you used to:

This one definitely hit HARD. 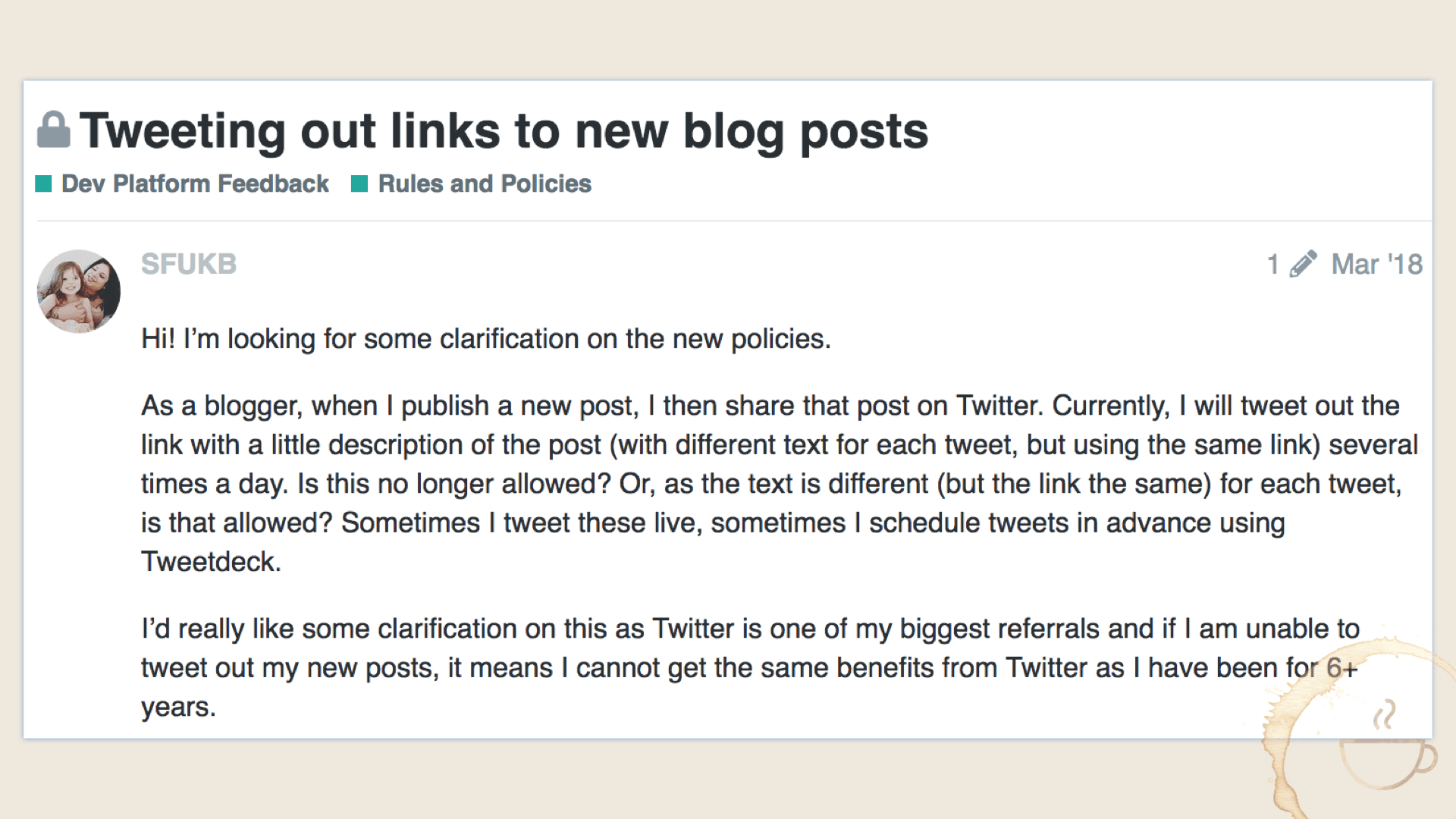 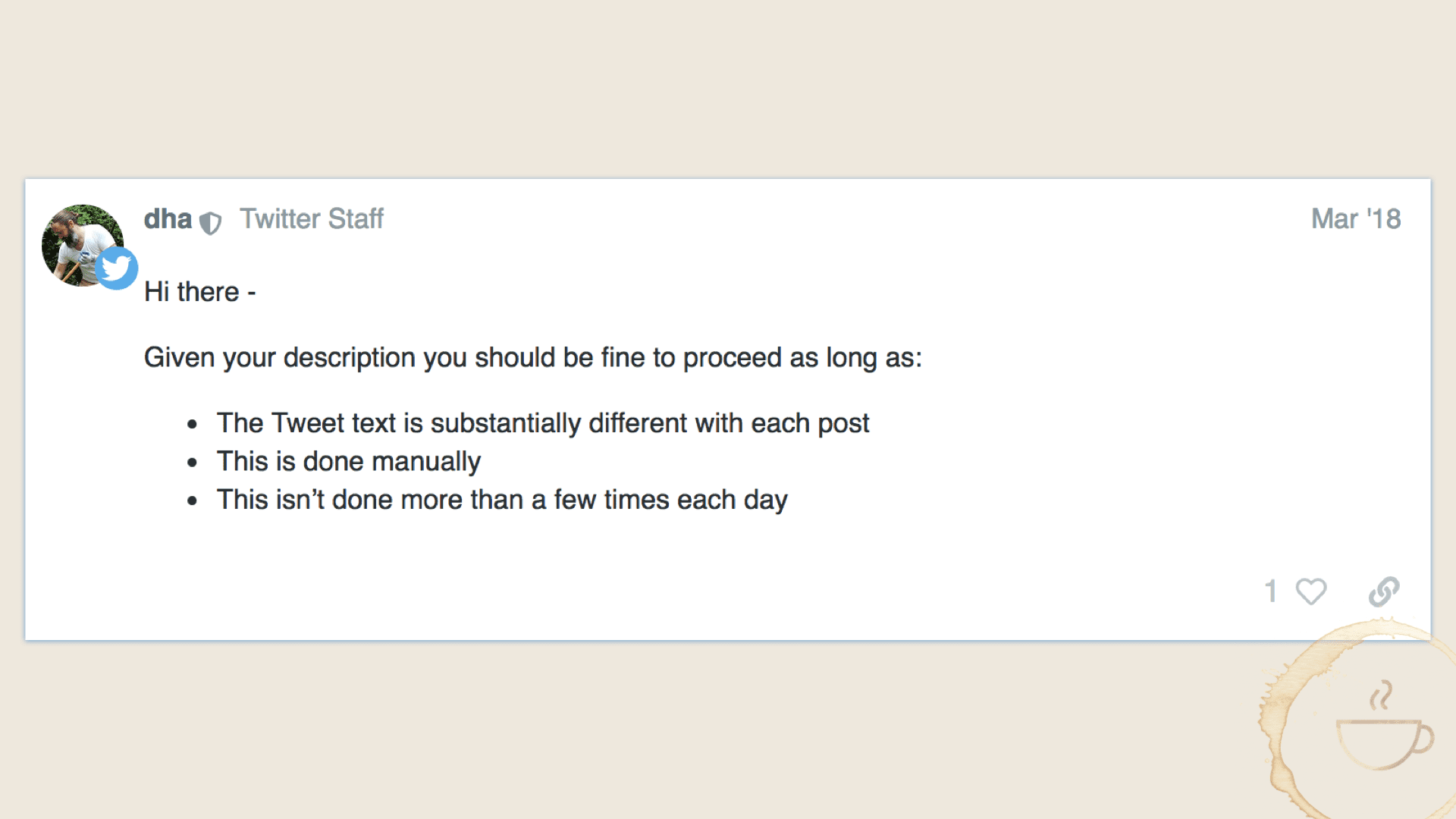 Yet another question follows: 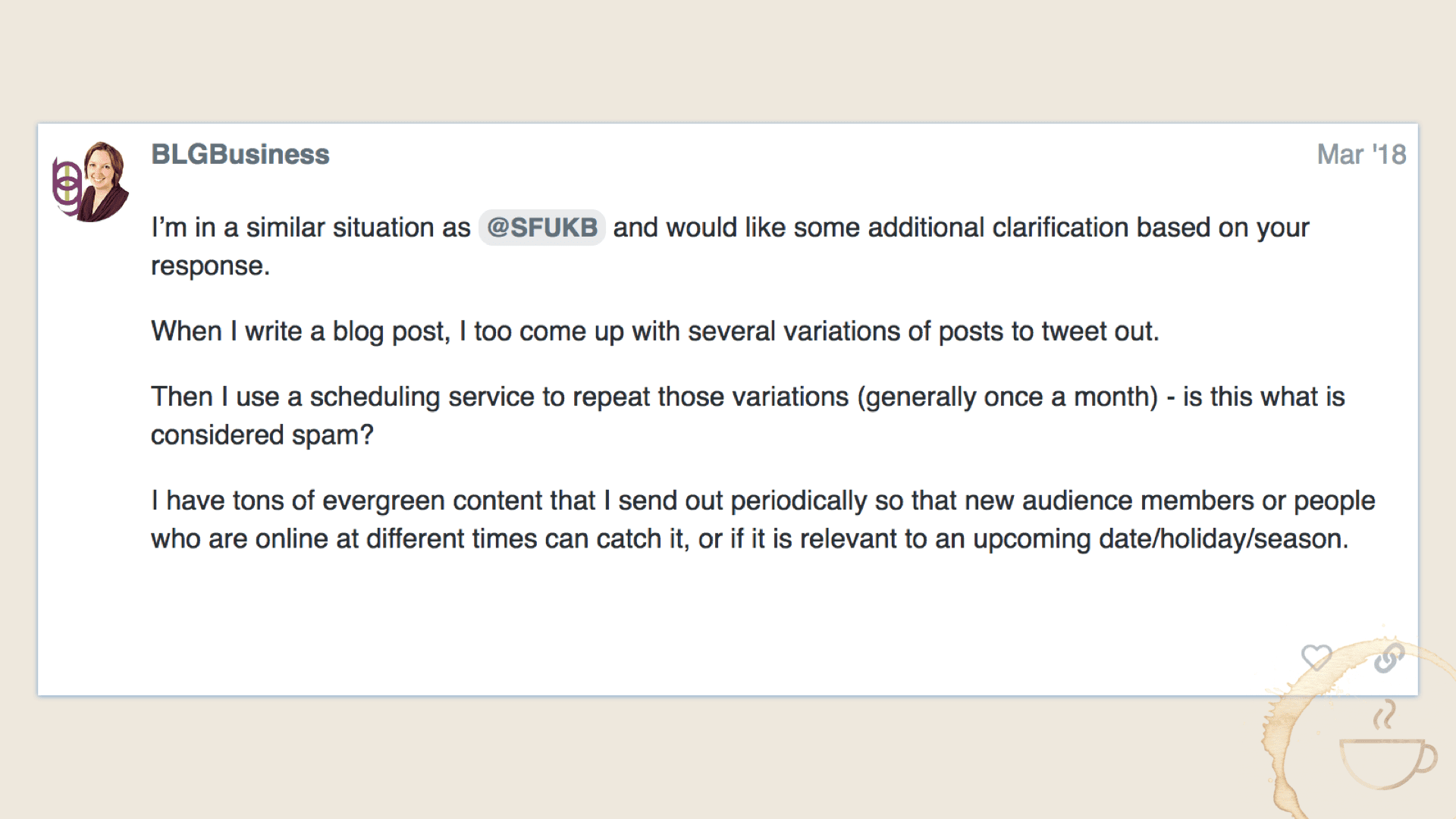 To that, Twitter says, “Sorry, we aren’t here to entertain every question about our policies.”

There you have it.

A whole list of don’ts and only one way to do:

But then again… if more and more marketers stop using Twitter to promote their businesses, wouldn’t that create a great opportunity for those of us who don’t mind putting some elbow grease into it? 🤫🤩

Doing it ‘aggressively‘, in other words.

And it’s up to Twitter to decide whether what you are doing is aggressive or not. How convenient, right?

I once had a brand new Twitter account suspended within an hour of its creation for that very reason: I engaged with (liked, @mentioned) and retweeted too many posts within that hour.

I was just trying to make my account look less ghost-towny! Since I didn’t want to tweet out a bunch of Traffic Generation Café posts (that was too spammy for my taste, ironically!), I decided to give some retweeting/engagement love to the people I had started to follow.

Alas, that was exactly what got me banned! 😤🤬

So, how do you stay out of this kind of Twitter trouble?

Let’s say you go to your Twitter timeline to do that manual thing Twitter wants us to do – converse, engage, relate, be present.

Give yourself a limit – let’s say to like 5 tweets, to retweet 5 tweets with a thoughtful comment to go with each one, and to share one of your blog posts in-between.

OR better better yet, establish an easy-to-follow daily Twitter routine to make sure you make the most of Twitter within the least amount of time.

…if you have followed and/or unfollowed a large number of of accounts in a short time period, particularly by automated means (aggressive following or follower churn).

And, as if that was unclear in any way, here’s more: 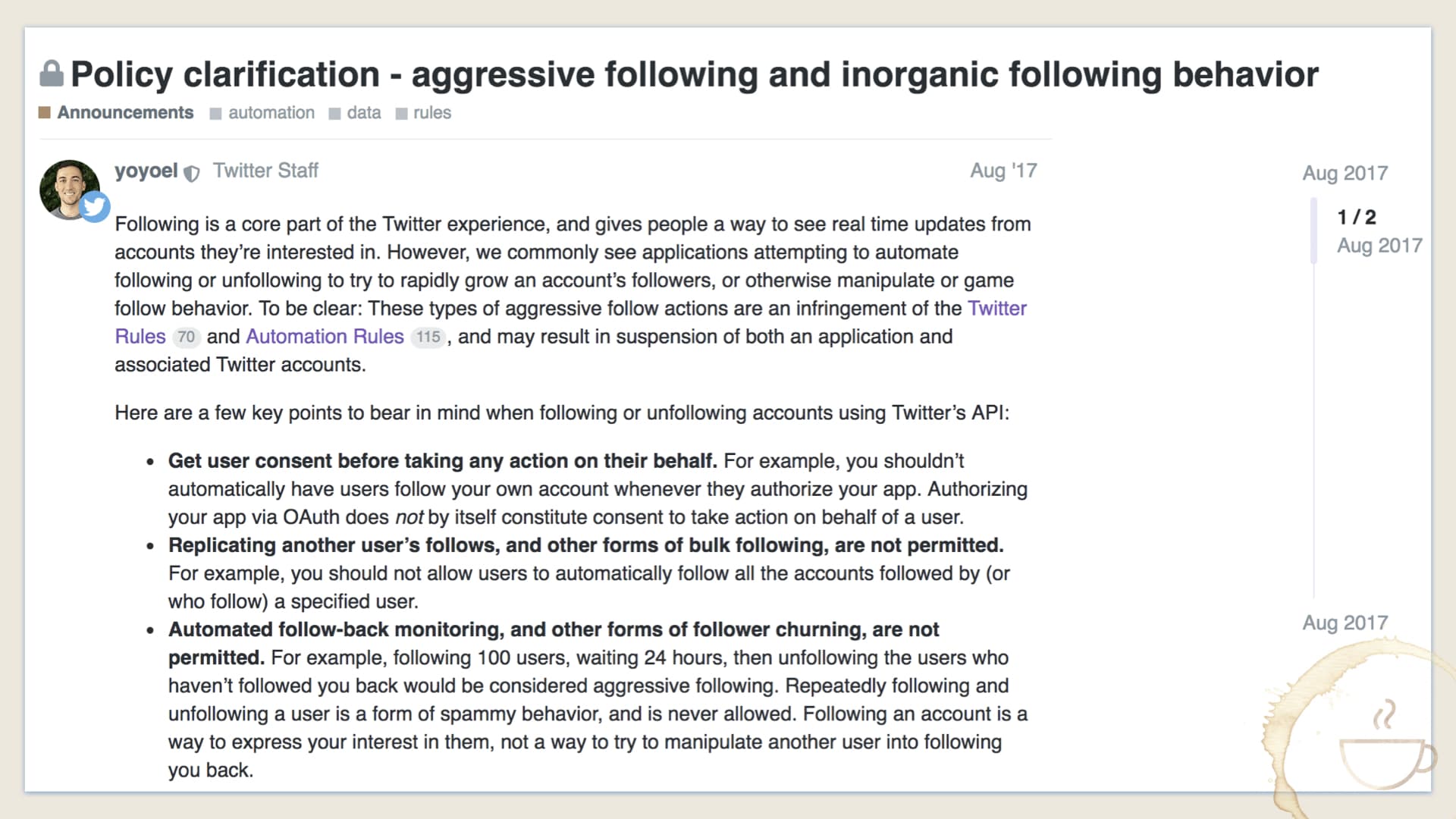 Following/unfollowing users was always a huge part of my Twitter marketing strategy.

So much so that I don’t mind going a bit gray hat on this one every once in while.

…if you sell, purchase, or attempt to artificially inflate account interactions (such as followers, Retweets, likes, etc.); and

…if you use or promote third-party services or apps that claim to get you more followers, Retweets, or likes (such as follower trains, sites promising “more followers fast”, or any other site that offers to automatically add followers or engagements to your account or Tweets).

It’s one thing to use a Twitter automation tool to make your life of getting more followers easier (but you still have to do the work!!!), and it’s something completely different and definitely spammy to outright BUY followers, Retweets, likes, etc.

This one is easy: DON’T DO IT.

…if you post multiple updates to a trending or popular topic with an intent to subvert or manipulate the topic to drive traffic or attention to unrelated accounts, products, services, or initiatives.

Say, you create a tweet, then add a popular/trending hashtag to it – not because it’s relevant, but because you want your tweet to be seen by the people following the topic.

That example is a clearly spammy and unacceptable way to market your business.

I am sure most of you don’t do that, but there are many other ways to abuse trending topics… be assured that Twitter is monitoring that one very closely.

Social media is NOT a storefront. Not the right place to make a sale… unless you are paying for ads, of course.

Bring your followers back to your site. THEN convert them.

Now comes the hard part: paying for your Twitter indiscretions.

I’ve got some good…. aaaaaand some bad news for you.

The good news is Twitter is genuinely trying to make the platform better for everyone.

And they ‘aren’t there to getcha…‘

Should they feel that your otherwise healthy Twitter account is getting into a bit of trouble with Twitter rules, they won’t just ban you, I promise.

They’ll try to warn you first (most often, send you an email notification), then might give you a slap on the wrist.

…we are not being overly harsh with an otherwise healthy account that made a mistake and violated our Rules.

(Hmmm… Remove it and count your blessings!!! 😅)

This notice will stay for 14 days after the tweet was removed.

Once again, this slap on the wrist is reserved for an otherwise healthy account that is ‘in the middle of an abusive episode‘, as Twitter puts it.

If that’s your punishment, then:

The duration of this enforcement action can range from 12 hours to 7 days, depending on the nature of the violation.

This is something that’s referred to as ‘restricting or limiting an account or content’ throughout Twitter Rules, yet there’s no specific section that explains what it is.

The only other piece of info we have is:

Limiting Tweet visibility depends on a number of signals about the nature of the interaction and the quality of the content.

If Twitter suspects you are running one of those Twitter spam rings, they will lock your account (remove it from follower counts, Retweets, and likes) and require you to verify account ownership with a phone number or email address.

Compared to a Twitter account suspension, all previous enforcement actions were just that: slaps on the rist.

That’s the good news: if you believe Twitter made a mistake, you can appeal your account suspension.

If you are lucky (i.e. you have a good explanation of why you’ve screwed up), you’ll get an email like this:

Twitter will remove your account from global view AND you will not be allowed to create new accounts.

Bookmark this post and use it as a guide of what not to do to remain in good standing with Twitter. 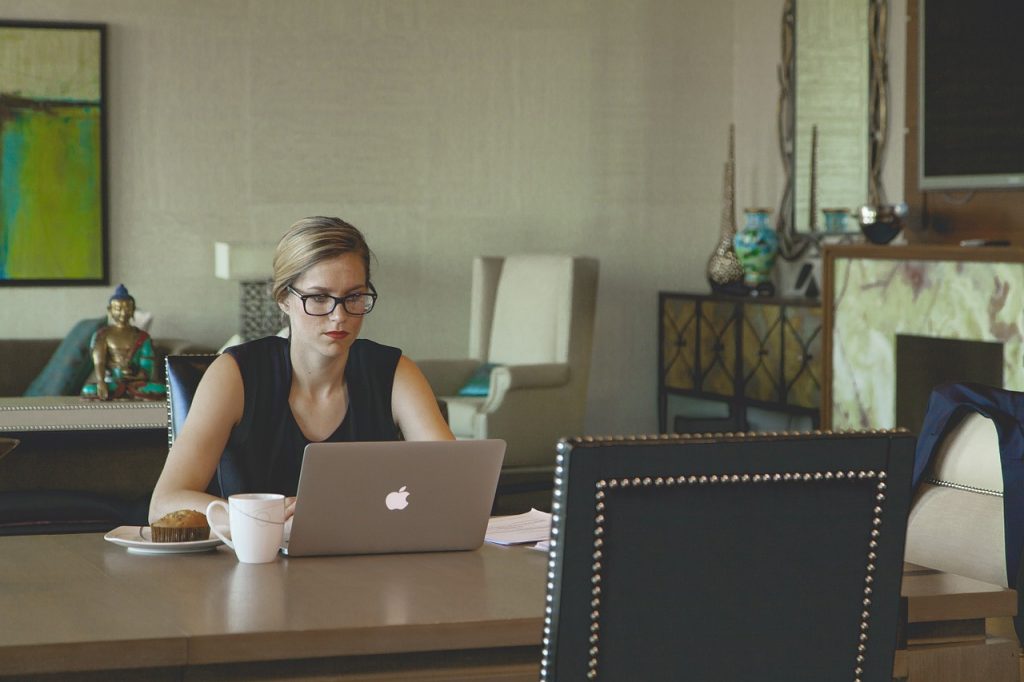 Triberr: Your Step by Step Guide to Being Heard 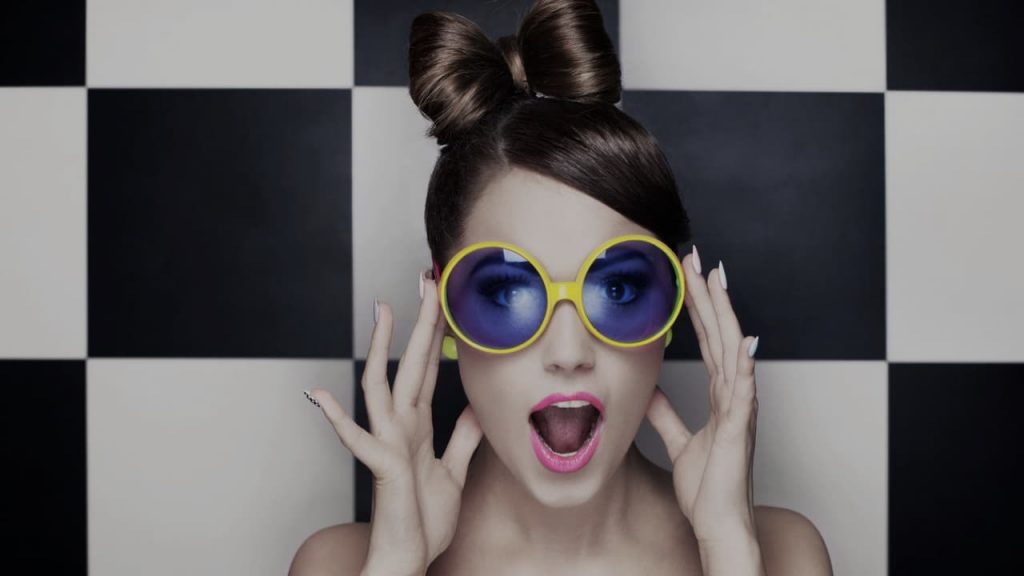 100+ of the World’s Most Clever and Funny Twitter Bios

254 Intelligent comments · espresso yours below